Why are women underrepresented in academic leadership roles (Figure 1)? And is there something we can do about it? A career in academia is an obstacle race and it’s receivable that not everyone wishes work to spill over most aspects of their life, from how much time they have to accommodate family life or for their hobbies. But why are women more likely than men to change career after completing a PhD and spending a few years as a postdoc? Research done to address this question suggests women have a few more hurdles than men to remain competitive in the academic career race.

One of the most obvious hindrances to women’s career progression is the “baby penalty”. While men are increasingly implicated in childcare, the decision to start a family still has a larger impact in women’s careers, because of the time spent away from the lab in late pregnancy and after giving birth. In another article in this newsletter we discuss the aims and initial results of a measure the NCCR implemented to minimize the impact of pregnancy and maternity on female trainees’ career progression. While we believe this measure will alleviate part of the strain on women, we are convinced that by itself this measure will not be sufficient to repair the leaks in the pipe. Why do we think that? A number of other measures to minimize the baby penalty, for example extended eligibility criteria or reentry fellowships for women, have been in place for a few years now and their impact on women career progression in academia has is so far limited (Figure 1). So what else drives women’s decision to leave academia? A recent survey carried out by Nature may provide some clues (Nature 562, 611-614 (2018)). When questioned about different aspects of their job, women consistently reported being less satisfied (on average 5%) than men. A fifth of the individuals responding to this survey claimed having experienced some kind of discrimination, the most prevalent type being gender discrimination (40%), which seemed to affect more generally women than men (91% of respondents). While other types of discrimination (age or race, for example), which are unfortunately present in academic research as well, can also slow down an individual’s career progression and the overall diversity of research teams and leadership, the focus of this article is gender bias. Why? Gender bias is the most prevalent type of bias and is among the easiest to quantify. Importantly, the general mechanisms underlying gender biases and how to minimize their impact are generally applicable to all types of discrimination, making it a good test case.It is hard to understand why women feel discriminated in a society where they can virtually access all jobs. This is even more puzzling in an academic environment where the criteria for career progression are said to be clear. But the survey in Nature (Nature 562, 611–614 (2018)) and other surveys indicate they do. Why? One possible explanation comes from a body of research on gender and career. Most of these studies suggest women may have to jump some extra hurdles to succeed, which probably contributes to fatigue and an increased rate of abandon. These extra hurdles are there from the start of the race. For example, in life sciences a white male candidate is 9% more likely to receive a response to his spontaneous application than a female candidate (J. of Applied Psychology 100(6), 1678–1712 (2015)). And US elite biology male faculty members hire 11% fewer female graduates students and 22% fewer female postdocs (PNAS, 111(28), 10107–10112 (2014)). This may in part be due to the moderately lower competency rating a female is likely to get compared to a male with an identical CV (PNAS 109(41), 16474–16479 (2012)). Perhaps surprisingly, women are as likely as men to take genderbiased decisions (PNAS 109(41), 16474–16479 (2012)).A stellar publication track record will take you a long way into landing that faculty job. But authors are not equal in the eye of coauthors, reviewers and editors, which likely contributes to the relatively fewer than expected women with first author papers in top journals. For example while 40% of postdocs in neurosciences are women, only 25% of papers in top journals in this field have female first authors (bioRxiv, doi: https://doi.org/10.1101/275362). Is it that women work less hard? An analysis of papers where the first authorship was shared between a man and a woman uncovered that males were 6% more likely to be listed first. This indicates that women get less credit for their contributions on publications (bioRxiv, doi: https://doi.org/10.1101/241554), something that has been suggested by other studies. The likelihood of getting a paper accepted if the first or last author is a male or a female is also not equal. In the fields of Evolutionary Biology and Ecology, introduction of double blind peer review led to an over 7% increase in acceptance rates of female first author papers (Trends Ecol. Evol. 23(1), 4–6 (2008)). A recent study analyzing review reports from eLife indicates that if the last author of the paper is a woman, there is a 3% lower chance of the manuscript being accepted for publication (bioRxiv, doi: https://doi.org/10.1101/400515). When applying for funding, women also appear to be penalized. After accounting for hindex, funding history and other confounders, Tamblyn and colleagues (CAMJ, 190(16), E489–E499 (2018)) found that women received lower grant scores than men. The authors of this study suggest that the lower scores may be linked to women generally being perceived as less competent, having weaker leadership skills, and that evaluation criteria may favor male stereotypes. The effect size of this bias, as that of all the others, is low. However, based on simulations a 4% bias in grant assessment leads to 20% lower grant success (Research Policy, 44(6), 1266–1270 (2015)), which will ultimately have a strong impact on the research led by women.Given that careers in science are built on track record, even if these different biases have relatively moderate effect sizes, they seriously contribute to our inability to retain women in academia. Biases on the perceived contribution of women to projects, fewer opportunities to engage collaborators / mentors /sponsors, lower publication acceptance rates and fewer grants all contribute to decreased job satisfaction of women that eventually leads, in some cases, to a decision to change career path. Given the recognized contribution of diversity to increased performance on a variety of tasks/challenges, the leaks in the pipe not only impact the lives of women but also the potential of future scientific developments. 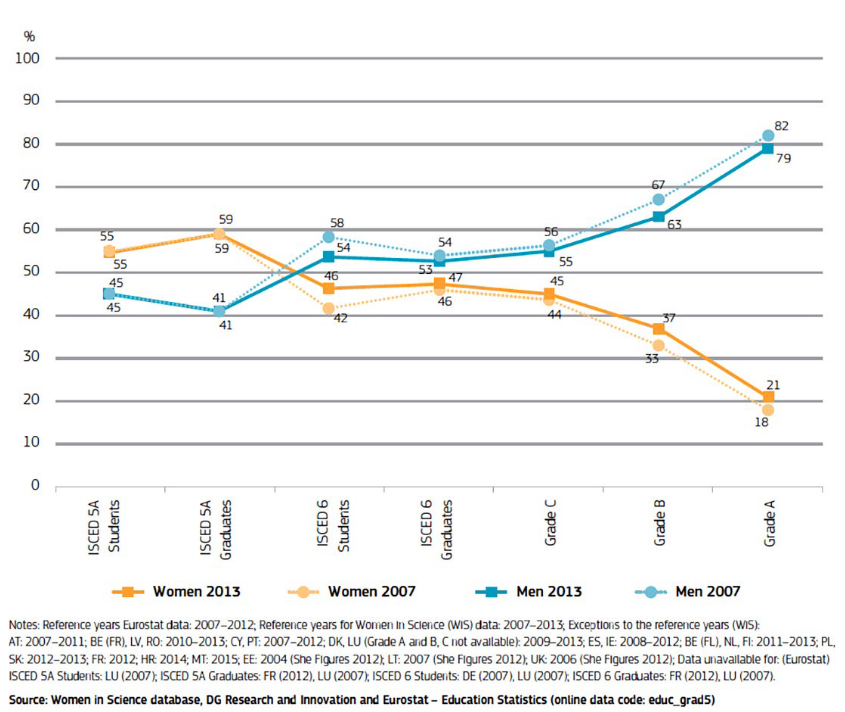 Figure 1: Proportion of women and men in a typical academic career (http://ec.europa.eu/research/swafs/pdf/pub_gender_equality/she_figures_2015-final.pdf)

In the vast majority of cases, the biases described here do not reflect conscious decisions to hinder the career of women. Instead, many of these extra hurdles are a consequence of unconscious biases. As scientists, we rely daily on our logic and rational thinking to solve complex problems, and it is thus reasonable to believe such irrational behavior would not affect our daily professional interactions. However, most of the studies described here analyzed the behavior of individuals that like us work in life science research. Furthermore, a number of legal complaints of gender discrimination deposited by women at top institutions (for example at the Salk Institute) suggest that unconscious biases are prevalent in academic research. So how can we address these biases and fix the pipe? Probably the simplest and most important step is to become aware of our biases and how they impact our professional interactions. Test your implicit biases (https://implicit.harvard.edu/implicit/) and talk openly about the topic with colleagues. Another factor that will reduce such biases is critical mass. When diversity is the norm, such biases are diluted. Increased diversity at higher ranks in academia ultimately relies on unbiased recruiting procedures. Besides specific training of search committee members on implicit bias, discussing the job profile early, deciding what are the hiring criteria and defining the questions that allow to asses these criteria in a concrete manner, minimizes the impact of bias in hiring and leads to more diverse appointments (BioScience, 65(11), 1084–1087 (2015)). Because we recognize the impact of unconscious bias on diversity, we have made this topic a central point of the NCCR RNA & Disease Equal Opportunities strategy for phase 2. We have already started to engage in training opportunities (refer to our meeting report) and we will organize training events tailored for NCCR trainees and PIs during phase 2. We believe that addressing the impact of implicit bias on women’s job satisfaction and career progression is as important as tackling other perhaps more tangible hurdles, such as the baby penalty. We expect that this multifactorial equal opportunities strategy will contribute to increased overall job satisfaction across the network and at our scale help fix some of the leaks in the pipe.