A successful career in academia is an obstacle marathon. Becoming a parent impacts everyone’s performance but particularly for women, who need to be away from the lab to take care of a new child, the impact on career progression is more substantial. Taking a baby break during a PhD or postdoc feels like stepping out of the track while already seeing the finishing line and when everyone else is still running. After a maternity leave, new mothers need to quickly regain speed and catch up with their competitors in order to stay in the race.

Most funding agencies and institutions recognize the negative impact of maternity in women’s career progression and most funding schemes now extend eligibility to account for career breaks. What most schemes fail to address, though, is the appreciable setback of the progression of the research project due to health and safety issues during pregnancy, as well as the frequently complete discontinuation of the project when the scientist is on maternity leave. In a research environment, where competition is fierce and speed is critical, the delays caused by maternity represent a serious burden to women’s career development. To minimize the negative impact of pregnancy and maternity leave on project progression, the NCCR RNA & Disease offers a Pregnancy and Maternity Leave Compensation support for PhD students and postdocs (PMLC). This scheme allows grantees (with the support of their host PI) to request funding to cover the salary of one research assistant during the last 3 months of pregnancy. During this period mum-to-be and research assistant will overlap, which should ensure appropriate training of the research assistant who will then continue the project of the expectant researcher during the duration of her maternity leave.

“The overlapping time in the end of the pregnancy is really important to explain the project in detail and to teach the most used methods in the lab.”

The support scheme helps managing the research project during maternity leave, prevents its complete interruption and promotes a smooth reentry after the baby break (Figure 2). 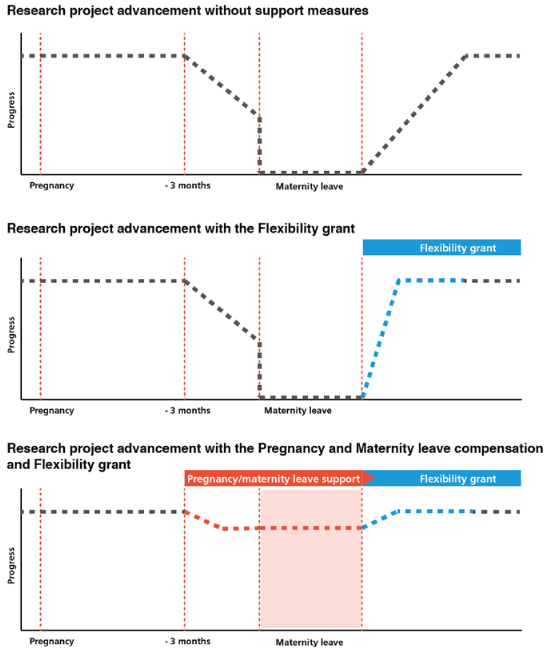 “This has kept the project advancing during several months when the work would otherwise have been stopped.”

These factors are also all highly beneficial for the supervisor of the expectant researcher whose interests lie in supporting the careers of his/her young academics and generating continuous scientific output on a competitive level. This scheme also offers the expectant an opportunity to build her personnel and project management skills, which will be useful for those aiming a career in academia. The PMLC fills a gap for which no other support scheme exists so far. Moreover, it is an ideal extension of the Flexibility Grant offered by the SNSF (Swiss National Science Foundation), which is currently only available to postdoctoral fellows with respect to the employment of a support person.

“It kept the project moving forward without interruptions. It is a great scheme which helps both the student and the supervisor”

Since its implementation in June 2016, the NCCR RNA & Disease has issued three PMLC grants to scientists of the network. The first three grantees have highly appreciated the unique benefits associated with this support scheme. The temporal overlap between the grantee and the research assistant towards the final phase of the pregnancy has been judged as extremely valuable for training and knowledge transfer. In most cases, the set goals for the duration of the grant were met and, most importantly, all projects progressed during the maternity leave, thus fulfilling the main aim of this scheme. The grantees underlined the importance of support by their supervisor and a good information exchange during maternity leave. The commitment of the supervisor is crucial in order to be eligible for the PMLC, as the freed funds released through the maternity allowance will be invested to cover the salary costs of the support person during the grantee’s maternity leave. Identifying a suitable support person for such a shortterm position has been described as the most challenging aspect related to the grant. The fact that the first three recipients of the PMLC grants were all PhD students at the time of application, indicates the need for such support measures at all levels of an academic career. Therefore, we have voiced our interests towards the SNSF Directorate for making the Flexibility Grant fully accessible also to PhD students.

“Thanks to the NCCR and my supervisor with his modern attitude I was not obliged to interrupt or abort my PhD.”

The possibility of employing a support person continuously from the pregnancy, throughout the maternity leave, and upon return, will not only allow projects to advance despite motherhood, but also improve worklife balance and, in addition, render the position more attractive for the research assistant. Notably, one of the grantees has meanwhile crossed the marathons finishing line and successfully defended her PhD thesis, for which we congratulate her. We will continue to evaluate the impact of the PMLC grant by monitoring the career path of all past and future grantees.

“I consider myself very privileged that I could benefit, because such resources are still not a normal standard in Switzerland and the NCCR sets a great example.”

Maximum benefit at no additional expenses: This support can come at no additional financial costs for the recipient’s supervisor. The NCCR RNA & Disease covers the salary of a support person during the last three months of a grantee’s pregnancy up to a 100% of worktime percentage (max. CHF 20'000.–) while the supervisor commits to use the freed funds released through the maternity allowance to employ the support person on the recipient’s project during her maternity leave. The supervisor may use additional funds to increase the worktime percentage of the support person during maternity leave in case the freed funds do not cover the salary of a fulltime employment. You can find more information on the Pregnancy and Maternity Leave Compensation and the Flexibility Grant on our Equal Opportunitie website.

“I think this is real support for women and definitely helps my professional career and future.”