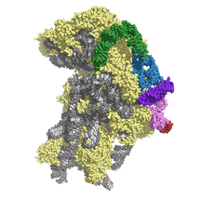 Hepatitis C virus (HCV) is a widespread pathogen that currently infects about 160 million people worldwide. Scientists at ETH Zurich supported by the NCCR in RNA and Disease have now visualized the process, in which the virus hijacks the protein production machinery of human cells, called ribosomes, to produce all viral proteins. This process depends on a structured viral messenger RNA molecule that binds to the human ribosomes, referred to as Internal Ribosome Entry Site (IRES).

Hepatitis C, caused by HCV, is a chronic disease that leads to liver cirrhosis and cancer resulting in approximately 12.000 deaths each year. Its worldwide spread and deadliness are comparable to that of acquired immune deficiency syndrome (AIDS), caused by the human immunodeficiency virus (HIV). During infection with HCV, the viruses enter human cells and reprogram them to produce more virus particles. One important step in this process is the production of the viral proteins. Typically, the cell tightly controls protein production using proteins called translation initiation factors, which bind to the ribosome to initiate protein synthesis based on the information contained in the messenger RNA molecule. However, many viruses, such as HCV, use special messenger RNAs that form a complex three-dimensional structure, called IRES, to tightly bind to the ribosomes and efficiently produce large amounts of viral proteins without being subject to cellular regulation.

To understand how these IRESs are able to subvert the normally tight control over protein production Prof. Nenad Ban and his group at the Institute of Molecular Biology and Biophysics at ETH Zurich have investigated the structure of the IRES from HCV in complex with the human ribosome. Previous structures at lower resolution allowed the approximate determination of the binding sites of the IRES on the ribosome, but precluded the visualization of the interactions in detail. The group of Prof. Ban used a human cell line to purify ribosomes and was able to form the complex between the ribosomes and separately prepared HCV IRES. Using advanced cryo-electron microscopes available at the ScopeM platform of the ETH Zurich, they succeeded in obtaining the structure of this complex at 3.9 Å resolution, which was now published in the journal Nature Communications. The resulting atomic model of the ribosome-bound IRES allowed for the first time to investigate the molecular interactions that the IRES uses to bind the ribosome and manipulate it to produce viral proteins.

Despite its prevalence, so far, no vaccine exists against HCV. The disease can be cured, but the treatment is very expensive and successful in only about 70% of the cases. Therefore, considerable research is being invested in developing new and more effective drugs. HCV IRES represents an interesting drug target as it is indispensable for virus replication and no molecule with similar structure exists in humans. The molecular structure of the HCV IRES bound to the ribosome can now be used to facilitate the development of new drugs that would interfere with the binding of the IRES to the ribosome and therefore inhibit the production of virus particles.